A Gentleman and a Scala
Understanding math through code

Probability is in the process

I came across an old post by Eliezer Yudkowsky on Less Wrong entitled Probability is in the Mind. It immediately struck me as, well, more wrong, and I want to explain why.

A brief disclaimer: that article was published 8 years ago and he may have changed his thinking since then, but I’m purely out to address the idea, not the person. So here goes.

First I’ll lay out his argument, which he does through a series of examples.

The quantum eraser is a variation on the classic double-slit experiment. If you ever have any doubt about the weirdness of quantum mechanics (“oh, there’s probably some classical explanation for all of this”), this experiment is designed to remove it.

The experiment involves two entangled polarized photons. The first goes straight to a detector, and the second passes through a barrier with two slits before reaching a detector.

Is the NBA draft rigged?

Had a chat with @jliszka about Bayes' rule, the '14 draft lottery, & the chances the NBA is rigged. Now I don't believe in anything anymore.

This chat basically consisted of Harry mentioning that the Cleveland Cavaliers got the first pick in the draft, even though the lottery gave them only a 1.7% chance of drawing that slot, then wondering aloud how he should update his prior on whether the NBA draft is rigged given this information, and then me breaking out my probability monad, because there’s no problem that can’t be solved with more monads.

Programming with futures: patterns and anti-patterns

Twitter’s Future library is a beautiful abstraction for dealing with concurrency. However, there are code patterns that seem natural or innocuous but can cause real trouble in production systems. This short article outlines a few of the easiest traps to fall into.

Below is a method from a fictional web application that registers a user by calling the Foursquare API to get the user’s profile info, their friend graph and their recent check-ins.

There are some problems with this code.

Good tech leads act as a member of the team, and consider themselves successful when the team is successful. They take their share of unsexy grungy work and clear roadblocks so their team can operate at 100%. They work to broaden the technical capabilities of their team, making sure knowledge of critical systems is not concentrated in one or two minds.

Bad tech leads take the high-profile tasks for themselves and are motivated by being able to take credit for doing the work. They optimize locally, keeping team members working on projects that benefit the team at the expense of the engineering organization at large.

Good tech leads have an overall vision for the technical direction of the product and make sure the team understands it. They delegate feature areas to other team members and let them own their decisions. They recognize that their team members are smart, trust them, and rely on them to handle significant pieces of the project.

Bad tech leads resist explaining or clarifying the technical direction and dictate decisions instead. They keep critical institutional knowledge in their heads, failing to multiply their effectiveness by creating and disseminating helpful documentation.

Correlation does not imply causality—you’ve heard it a thousand times. But causality does imply correlation. Being good Bayesians, we should know how to turn a statement like that around and find a way to infer causality from correlation.

The tool we’re going to use to do this is called a probabilistic graphical model. A PGM is a graph that encodes the causal relationships between events. For example, you might construct this graph to model a chain of causes resulting in someone getting a college scholarship:

Or the relationship between diseases and their symptoms: 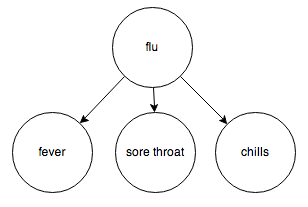 Or the events surrounding a traffic jam: 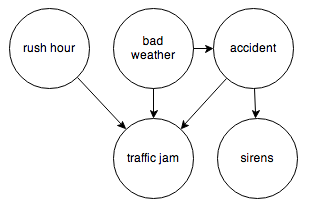 PGMs with directed edges and no cycles are specifically called Bayesian networks, and that’s the kind of PGM I’m going to focus on.

It’s easy to translate a Bayesian network into code using this toy probability library. All we need are the observed frequencies for each node and its inputs. Let’s try the traffic jam graph. I’ll make up some numbers and we’ll see how it works.

Unlikely things happen all the time

Yesterday I received an unexpected media query from Jen Doll, a journalist at New York Magazine, reporting on the story where Frank Bruni found Courtney Love’s iPhone in a taxi. She was musing about the statistical likelihood of an event like that, and somehow found this twitter thread where I had calculated the probability of getting the same cab driver twice. She wanted to know how I arrived at my figures and whether I had any additional insight on the question.

So of course I wrote her back a whole essay, and today there’s this article. Her editors had cut it way down, because journalism. But I had put all this work into it, so I thought I’d post it here.

The text of my reply is below.

This has nothing to do with the playground game, the church, or the mobile/social/local city guide that helps you make the most of where you are. (Disclosure: I work at Foursquare.)

This is about Lagrange’s four-square theorem, which states that every natural number can be expressed as the sum of four squares. For example,

The proof given on the Wikipedia page is only an existence proof, but I was able to find a mostly constructive proof elsewhere online. I want to present an outline of the proof along with some code that carries out the construction. Here’s a preview:

Peer reviews are the most effective kind of feedback — only your peers really know what it’s like to work with you, and they have the most insightful, nuanced and helpful suggestions for improvement. Almost every tech company I can think of does them as part of their annual review process. The problem is that everyone hates writing them, because decent feedback takes a really long time to write, sometimes on the order of 4 or 5 hours for a single peer review.

I’d like to solve this problem. Most people think that there’s a natural, unavoidable relationship between quality and time spent. But that overlooks an important point — the thing that makes writing peer reviews difficult is: writing itself.

Here are 5 easy steps to collecting insightful, critical, honest peer review feedback, in about an hour: