Every so often this article makes the rounds and it annoys me. That isn’t how traffic works and the proposed solutions won’t fix anything. Maybe you can eliminate the annoying stop-and-go, but no one gets home any faster. In fact you can prove that you and everyone behind you get home strictly later than if you had just gone along with the stop-and-go traffic.

Here’s how traffic works. First, we know from empirical studies that drivers tend to maintain a minimum following distance, measured in seconds. It varies per driver, but typically it’s somewhere between 1.5 and 2 seconds. That works out to a maximum theoretical flow rate of between 1,800 and 2,400 vehicles per lane per hour passing by a given point on the highway. Studies of actual highway traffic have measured flow rates as high as 2,000 vehicles per lane per hour, which works out to a following distance of 1.8 seconds. (I’m just going to call it 2 seconds for the sake of round numbers.)

The important fact: there is a limit to the number of cars that can pass by a given point on the highway in a given amount of time, and that limit is one car every 2 seconds, per lane. So imagine you are in heavy traffic during rush hour. There are a certain number of cars in line in front of you. Let’s pick a point on the road to call the front of the line — say, the point at which you plan to exit the highway. The line gets shorter by one car every 2 seconds. If there are 1,000 cars in front of you, it’s going to take a minimum of 2,000 seconds for you to get to the front of the line. It doesn’t matter whether people are kind and let cars merge in front of them, zipper-style. It doesn’t matter how much stop-and-go there is. The simple fact is that it takes 2 seconds per car for you to get to the front of the line, and there are some cars in front of you that have to get there before you do.

If anyone tries to tell you that if only drivers left space in front of them and took turns merging, traffic would flow smoothly, and it’s only because of jerks that there are any traffic jams at all, just ask them what’s going to happen at the next merge. Where is that extra space going to come from? You cannot keep 2 seconds back from the car that has just merged in front of you without, um, slowing down. If the car in front of you is also slowing down for the same reason, you have to slow down even more. This is basically the definition of a traffic jam.

Zipper merging is only beneficial insofar as it reduces confusion on the road, the way any convention does — like who gets to go next at a 4-way stop. Confusion leads to delay, delay leads to anger, etc., etc.

Suppose you’re on a 2-lane (each way) highway and one lane is closed up ahead due to construction. Now the flow rate of your lane is cut in half (or there are twice as many cars in line in front of you, depending on how you want to look at it). Road signs commonly ask you to use both lanes up to the point of the bottleneck. That’s reasonable advice, but it’s not going to get anyone home faster. Remember only so many cars are going to clear the bottleneck per second, no matter what happens upstream. The only thing this does is shorten the length of the backup on the highway — it’s a 2 mile backup instead of a 4 mile backup. This is good because it is less likely to affect other traffic by spilling out onto onramps and surface roads. Also maybe there’s someone on the highway who’s planning to exit 3 miles before the bottleneck. If the backup is 2 miles instead of 4 miles, that person doesn’t have to wait in traffic.

As an aside, whenever I see a line of cars on the highway (or, for that matter, any line of anythings anywhere), I make sure I know what it’s for before I get in it. If you see a line of cars in the right lane, and the left lane is completely empty, what do you do? Maybe the left lane is closed up ahead, and everyone decided to merge early. Or maybe the people in the right lane are trying to exit, and there’s a backup on the offramp, one mile ahead. I’m not getting in that line if that’s the case! One time I was driving and happened upon just such a situation. So I stayed in the left lane. Someone ahead of me pulled out into the left lane and kept speed with the right lane, blocking me from passing. I was pissed!

The situation is modeled pretty well by catastrophe theory, something I never thought would be useful. 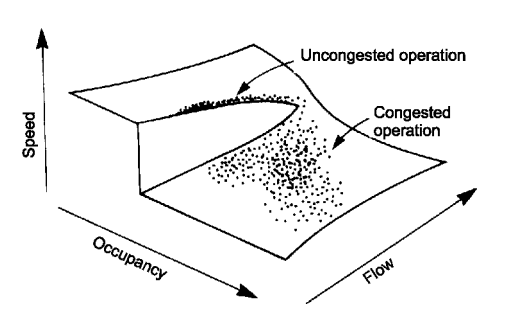 At low occupancy (cars per mile), drivers can go as fast as they’d like. As occupancy increases, so does flow rate, even though speed decreases somewhat due to everyone trying to maintain following distance. At a certain point, when occupancy becomes high enough, speed dips low enough to where drivers are unable to maintain their minimum following distance, and — catastrophe! — the flow rate decreases dramatically.

Let’s see how well this model predicts reality. Here’s some code that determines the flow rate and the speed of traffic as a function of occupancy (cars per km), according to the following-distance model:

Evaluating traffic with values of carsPerKm between 1 and 200 produces the following output:

Each dot represents a different value of carsPerKm and is plotted as the maximum speed and flow rate it implies. Below an occupancy of about 16 cars per km, the maximum speed that still allows everyone to keep a 1.8-second following distance is well above a reasonable speed limit, so I just capped it at 120 kph. Obviously real highway traffic is going to behave in more subtle ways than that. But it doesn’t matter because the congested part is all I care about, and this model matches observed data pretty well. Here’s some data from a meta-analysis by the Federal Highway Administration: 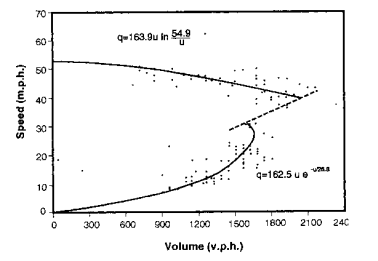 For another comparison, here’s what the model predicts for flow rate vs. occupancy: 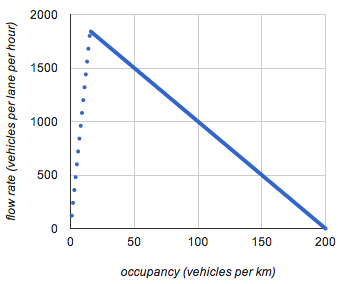 And here’s the data, from Freeway Speed-Flow Concentration Relationships: 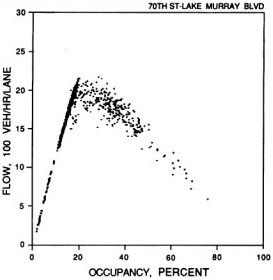 And a quote from the same source:

“The inverted-V model implies that drivers maintain a roughly constant average time gap between their front bumper and the back bumper of the vehicle in front of them, provided their speed is less than some critical value. Once their speed reaches this critical value (which is as fast as they want to go), they cease to be sensitive to vehicle spacing.”

Parameter tuning aside, this simple model predicts actual traffic so well that any reasonable discussion of the physics of traffic jams has to take it into account.

Update: Lots of great comments in the hacker news thread. One thing one of the commenters rightly points out is that this model does not account for the variance in flow rates in congested traffic. I don’t have any data to back this up, but it’s possible that variance in car length (% of trucks on the road) might account for it. Here’s the same model but with car length ranging between 5 and 8 meters: 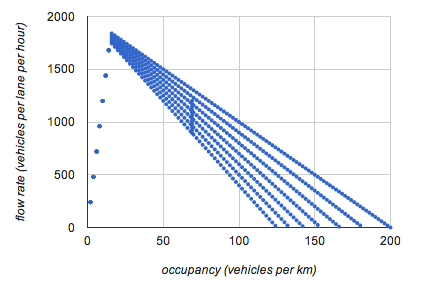 But it’s also possible that driver behavior is responsible for it. Pathological driving could certainly create pockets of low-flow traffic, as human response times and vehicle acceleration times aren’t instantaneous.

Since occupancy determines flow rate, there’s not much benefit to trying to “cancel out” a traffic wave by leaving a ton of space in front of you. No matter what you do, you’re not going to get to the front of the line before the car in front of you. Worse, by leaving space in front of you, you’re artificially reducing the occupancy of that part of the road, but since you haven’t changed the number of cars trying to use the road, this comes at the expense of increased occupancy somewhere else. Sure, there’s a beautiful line of cars behind you driving at a constant 35 mph, but behind that there’s a ridiculous traffic jam that didn’t need to be there.

Update #2: Drew R. makes a great point in the comments that there doesn’t always have to be a traffic jam at the back of that line of cars — specifically, when there is excess capacity in the road behind you, i.e., the flow rate is below the theoretical maximum and the occupancy is below the critical threshold where people start caring about following distance. You might know whether such a region exists behind you because you just drove through it. So in that situation, it is actually beneficial to try to smooth out the traffic wave by driving slower as you approach it.

At the risk of being helpful, here are some things YOU can do that are actually guaranteed to improve commute times for everyone: