For most values of and , the system quickly finds a stable point. For and , it converges in on and . You can check that this is a fixed point of the recurrence.

For other values of and , the system converges to a loop instead of a point.

Keep in mind the system is not necessarily going from one point to the next around the loop over time. It’s actually jumping between points that all happen to be on the same loop. Weird, huh?

At another point in the parameter space, the loop takes on an irregular shape.

Nearby, the loop breaks up into a set of smaller, weird loops…

… each of which proceeds to get weirder.

Then, everything gets weird.

This is beautiful if you ask me.

This is chaos (still beautiful).

Below, you can explore the parameter space yourself. Your mouse position determines the values of and . Hold down shift for fine-tuning. (On mobile, drag your finger around the canvas.)

As you move your mouse around, doesn’t it feel like you’re looking at 2D slices of some larger, crazy complicated 4D object? I thought so too.

Here is the 3D slice you get when you fix (not recommended on mobile). Click and drag to rotate, scroll to zoom. You can also edit the url parameter to try different values for .

A map of the territory

I’ll color each point according to how the system behaves with those parameter values. To do that I’ll use something called the Lyapunov exponent. This is a measure of how quickly two points and , initially spaced very close together, diverge or converge after repeated iteration. It’s assumed that the distance between them will go like , where is the iteration number. If , they stay the same distance apart. If , they get closer together over time, and if , they diverge. Larger exponents mean they diverge (or converge) faster.

I chose shades of green for , yellow for , red for , and purple for . If the system diverged to infinity (that is, gets very large), I colored the point black. 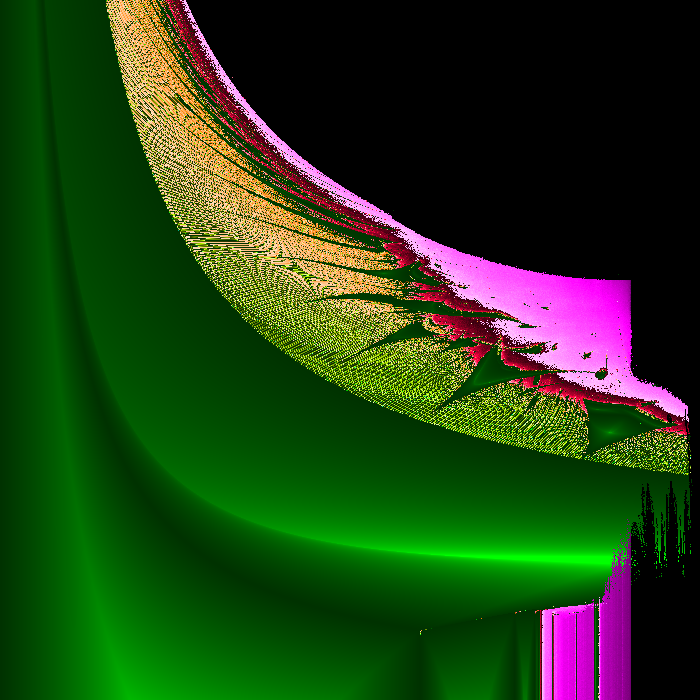 So, that’s a thing. Here it is as a 2400 x 2400 png. There is some definite fractal structure here. You can see this better in the higher resolution image, but the moiré pattern in the yellow/green region indicates long thin lines of alternating color. Between the big green triangles there are smaller triangles, and the bottom-left corners of these triangles extend all the way to the boundary.

But anyway, laying this map underneath the interactive plot from above, you can see how different regions of the parameter space behave. (Works on mobile too.)

I don’t know, but it’s closely related to the logistic map, which is a similar recurrence given by:

This would model a population of rabbits subject only to starvation (no foxes). It’s pretty crazy too: 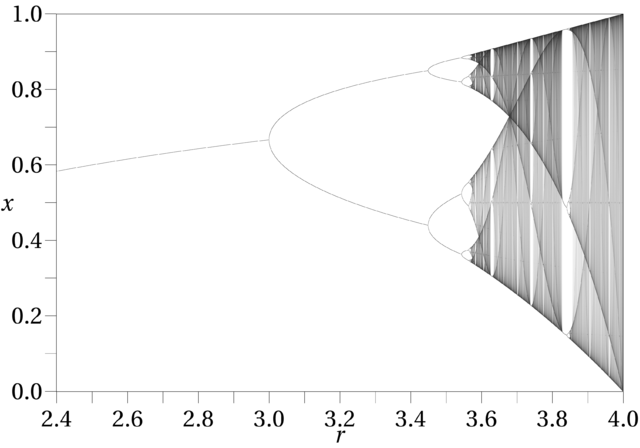 You can also find the ghost of the logistic map itself if you move your mouse around the small purple triangular region near the vertical bars around . Spooky!

There really is no so what. It’s just astonishing to me how much complex behavior can arise from two pretty simple rules.